Unlike the outdoor version, INDOOR Cricket is a blur of almost non-stop action: a little yellow ball zipping around a net-enclosed court at over 100 kpm, and 10 players running, diving, jumping and otherwise moving all the time.

The peak action moments are the split-second when a batsman and the ball meet, 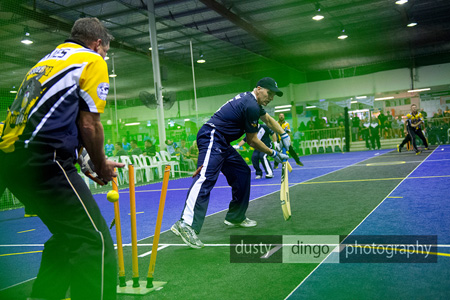 and the split-second a batsman sprints across the "crease" (the marking on the ground beyond which, once crossed, the batsman is "safe") as that moment coincides with the ball hitting the wickets. 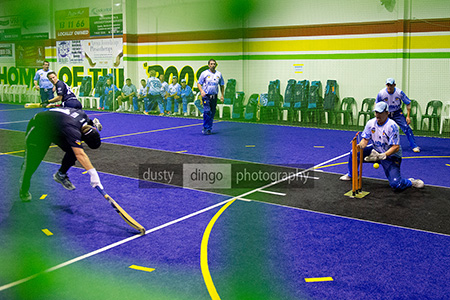 This post is about the latter, and the "human timing over technology" aspect therein.

In the first instance (batsman and ball meeting), the drama of the photo is maximised if the exact moment the ball hits the stumps is caught.

In the second instance, that drama is maximised the closer the batsman's bat is to the line.

Over the course of this tournament I published each day's photographs on the same evening they were taken. And each morning I'd hear comments along the lines of how good my camera's motor-drive or continuous-shot capabilities must be.

If I'd relied on the technology of my cameras, I'd have missed dozens of perfectly-timed shots like those above, even though the Nikon D4 I was using is capable of taking 11 shots per second . . . but mine doesn't because I shoot single shots. I never use continuous-shot mode (aka motor-drive for older, not-yet-caught-up-with-digital folk).

I've had more than one punter scoff at this assertion, until I explain the following:

at full stretch, a fit batsman in indoor cricket might be running at about 7 meters per second. The D4 can take a photo every one-tenth of a second, so between one frame and the next our batsman could have covered 70cm. So he could be up to 35cm before or beyond the line . . . 35cms!!

And what about the ball? While many can bowl at over 100 kph, let's say it's travelling at a leisurely 60 kph. That's 1 kilometer per minute. That's over 16 meters per second! Again, a photo every one-tenth of a second . . . between one frame and the next, the ball has travelled over 1.6 meters!!! So we could end up with a photo of the ball nearly one meter away from the stumps, or nearly one meter past the stumps.

Compare that to the photos above . . . on continuous shot mode, I would have been relying on luck to get anywhere near that position of the outstretched bat, or the ball just centimeters away after crashing through the stumps. In such situations, my sense of timing is going to trump the frame-per-second capabilities of even Nikon's flagship camera. Always. Each and every time.

Now of course there are situations where the high frame-per-second capabilities of modern cameras are going to be very handy . . . I guess . . . many sports don't have the same well-defined critical moments as discussed above, so blazing away at 11 shots per second, without having to worry about little things like timing and anticipation and understanding the game and reading the flow of the game etc etc, is going to get some interesting and exciting shots.

But for real excitement and drama, to really capture the essence of the sport and to capture that . . . ummm .  . . what's it called? . . . ah yes, to capture that "decisive moment" (now where have I heard that before?) . . . for me, nothing beats good old-fashioned human timing. 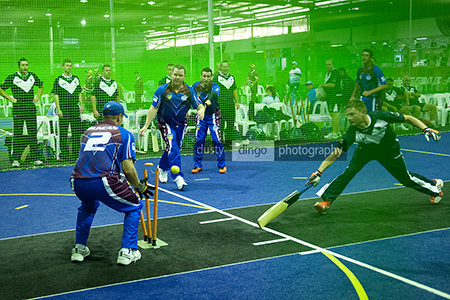 See the images of the 2013 Australian Masters Indoor Cricket Champioships